Last October, I was in Xi’an, China with campus leaders to report on UNMC’s activity in the world’s largest nation. It was our last dinner at the invitation of our Chinese hosts. The very large round table we sat at overflowed with tasty dishes. After dinner our hosts made toasts and we reciprocated. I mustered all my public-speaking courage (I’m a writer, not a public speaker), stood up, raised my glass and thanked our hosts for the incredible hospitality during our stay. I said if any of our hosts ever came to Nebraska, that I would like to host them for dinner at my house.

I made good on that promise about a month ago. During the opening ceremony for the UNMC-hosted International Student Research Forum and Joint Research Symposium, I was surprised to see Li Zheng and Hang Su. I had met the Tongji University students during our visit in Shanghai. They were volunteers who helped make our visit go smoothly. Now they were here for two months to do research in the Durham Research Center. I made a beeline to reintroduce myself and hoped they would remember me and be interested in being my guests for dinner.

A couple of weeks later I hosted my first Chinese guests.

Over dinner I got to know these two fun, curious and energetic students. We asked each other questions, laughed and talked about some of the first impressions many visitors from big Chinese cities have of Omaha – it’s much quieter here and no one walks down the streets (they drive instead). They were impressed that I had a backyard, something rare in China’s large cities.

After dinner I asked them what they would like to do in Omaha. I’ve been a visitor in foreign countries and it’s always great when locals take you under their wings. Without hesitation, Li said, ‘shopping.’ Shopping is a universal activity for women. I could relate. It’s one of my favorite things to do in a foreign country. Shop early and often is my motto. There we were at 8 o’clock at night heading to Village Pointe.

That started a two-week shopping marathon. Li needed to find her sister, friends and professors just the right gifts. And, a $100 Coach purse for her mother. I suspected this would be an impossible feat. Li told me designer items in the U.S. are much cheaper than in China (though most are made in China).

But $100 didn’t go far in the Coach store. We’d need a backup plan. Next week we’d start fresh. In the meantime the three of us rode a ferris wheel (though I’m afraid of heights) in a sporting goods shop.

I showed Li landmarks in Omaha (including Warren Buffett’s house). I took her out for Greek food for the first time in her life. We visited Oak View Mall. There were a lot of things there – just not the right thing.

Li was curious about how Americans spend weekends, so I took her to South Omaha to experience a little bit of Mexican culture and then to the Old Market for more “shopping culture.” (Taking her to my house to watch me clean then shop for groceries would have been boring.)

What are the chances it would rain that day for the first time in months? We tried to stay dry as we bounced in and out of several shops on 24th Street. We found lots of things that weren’t made in China, including some colorful handmade glass candle holders Li bought for her friends. Score!

In the Old Market, Li ate Mexican food for the first time – enchiladas, tacos, fried beans. She liked it. Later, she was excited to find a planner with wildlife photos for her sister who loves animals. She also bought a Native American dreamcatcher. We went to a few art galleries then to the Bob Kerrey Pedestrian Bridge for a photo of the skyline. We put one foot on each side of the line in the cement that designates the Nebraska and Iowa state lines (sounds dorky but it’s fun). 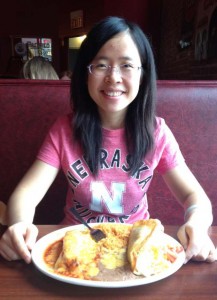 I came to realize that Li was a bargain shopper. Somewhere she had got a tip that discounted Coach purses were on sale at Von Maur. I was skeptical, but bargain hunting – I’d forgotten – is a sport in China. We hopped into my car and headed to Westroads. After just five minutes in the Coach section, there dangling on Li’s arm was with a clearance-priced, regular-sized Coach purse for a little more than $100. Unbelievable! Her trip to Omaha was complete!

During the last week of Li and her colleagues’ Omaha visit, they invited me to dinner at the UNMC International House. That night, the students assembled an array of 18 different meat and vegetable dishes that filled two large tables. It was a feast for the eyes and taste buds that rivaled the great food we had in China. I asked lead student and chef, Xiangyi Wen, M.D., “Victor” when he would open a restaurant in Omaha. 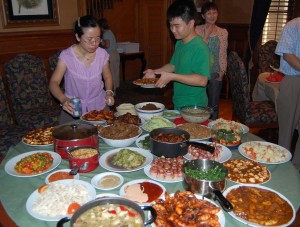 My experience with Li and her colleagues was much more than shopping. We became friends. We learned how much we have in common. I learned about Li’s life in Shanghai and her family. She told me her grandfather had died recently and that she was still very sad about it.

Our travels took us to places in Omaha I’d never been before, including to Pioneer Courage Park Monument – an impressive bronze sculpture that depicts four pioneer families and their covered wagons headed westward from Omaha.

I could draw a parallel to Li and her colleagues, who headed west back to China a couple of weeks ago. They have forged new territory as part of UNMC’s partnerships in China and I am happy to have been a part of their Omaha experience. It left me with unforgettable memories.