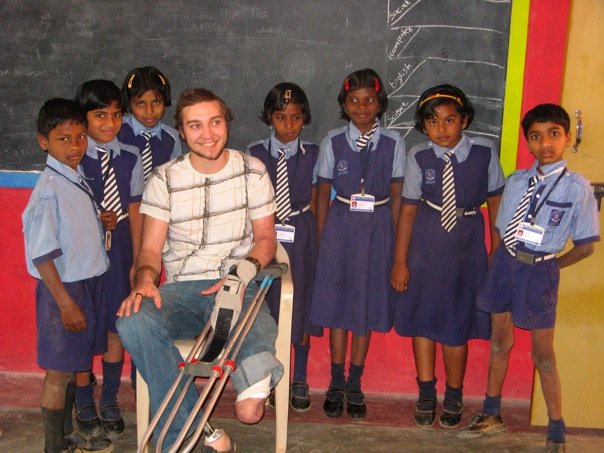 Caleb Baber surrounded by kids on a mission trip to India. He hadn't yet received his second prosthetic leg.

Hear the story of Caleb Baber, M1, and it’s tough to fight the lump in your throat: How he was shocked with 69,000 volts and almost died; how he spent 59 days in a burn unit and lost both legs just below the knees … and then made a mission trip to India, ran a 5K on prosthetics, went snowboarding, enrolled in the latest med school class at UNMC.

He survived it all and came out the other side, still running – it’s inspiring. But he doesn’t see himself as a symbol:

“Becoming a physician defines me much more than being a double amputee.”

He hadn’t held a lifelong goal of becoming a doctor. But after a while, it kept coming back to him. He kept hearing what he called a “still, small voice.”

Baber is a deeply religious young man. He feels compelled to act after watching the movie “Hotel Rwanda.” He’s gone to India to embrace those called untouchable.

On a pivot, he went hard into pre-med.

But on a hike, he scaled an unmarked tower, in a forest in Tennessee in the midst of his undergrad, in 2008. He doesn’t remember much more.

But the rehab pictures on his comeback blog show nothing but grins.

He had to put on an artificial limb for the first time and stand on it, nobody else. He made the lonesome, final call to cut off his legs.

But people who loved him were there for him. They didn’t even realize what that meant to him. He could do anything, alone, because he knew he did nothing alone.

“Those were the things that carried me through,” he said, “and gave me the strength and the will to do the painful things.”

Every doctor knows the value of support systems. But how many really know?

Baber knows the days he thought he might die; and the day he walked again, on new legs.

“There’s going to be lots of run-of-the-mill stuff in my life as a physician,” he said. “But there will be times of being able to talk to someone and say with absolute confidence, and some pretty solid evidence, ‘You can make it through this.'”