UNMC on the Road

We like to say the UNMC campus is 500 miles wide. Sure, there are locations in Scottsbluff, Kearney, Lincoln and Norfolk, but it’d be a tad bit impractical to build an affiliate in every city. Instead, we take UNMC on the road each year with the Chancellor’s out-state trip, the UNMC Speakers Bureau and most recently, the Nebraska State Fair. 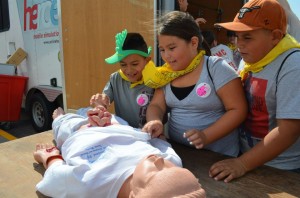 It takes just over two hours to get to Grand Island from Omaha. Some might dread this drive, but if you’ve ever ridden in a car with Tom O’Connor, you know there’s never a lapse in good conversation. Before we passed Lincoln, I learned that Dr. Scott Shurmur -an interventional cardiologist here at UNMC- played football for Tulsa, the meaning behind “I Can’t Drive 55” by Sammy Hagar, and the definition of hibernian. If you’re going on a long car trip, I recommend Tom.

Here are some highlights from our two days at the state fair.

-A older gentlemen approached us and wanted to know how to go about donating his body to science upon his death. None of us knew anything about that, but Jessica Brummer got on the phone right away and got some information for him. There’s no way to know if one of our future students will learn from him in our gross anatomy lab someday, but the prospect that it could happen and possibly because of our presence at the fair makes the whole trip worthwhile.

-Between 700 and 800 senior citizens stopped by our booth on “Older Nebraskans” day. Senior nursing students took more than 500 blood pressures, 25 of which caused them to encourage the individuals to see their primary care provider. The Eppley Cancer Center did hundreds of skin cancer screenings and sent 94 Hemocult kits home with people for colon cancer screenings. College of Pharmacy students did so many bone density and glucose screenings that they ran out of supplies. 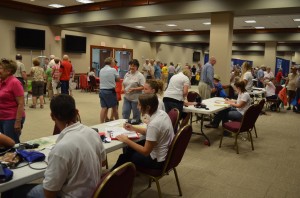 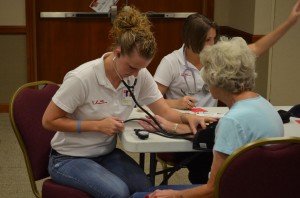 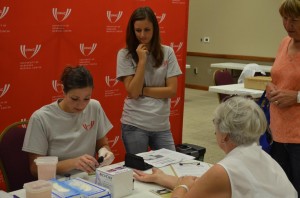 – Fifty-year-old fair volunteer, Sandy Petzoldt, deserves one of the “UNMC Walks to the Olympics” medals. Not only did she agree to walk around the fair as “Pinky the Elephant” for the Nebraska Regional Poison Center (which is supported in part by UNMC and The Nebraska Medical Center), she did it for more than four hours on a 90-degree day. With spunk. She strutted down the street, high-fived fairgoers and hugged all the kids who came running up to her like she meant it. 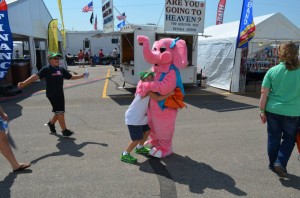 -More than 300 UNMC jar openers were given away to seniors on “Older Nebraskans” day. They also sat on the table during “Nebraska’s Largest Classroom” day in case any adults stopped by our booth. One little boy asked if he could have one. I told him they were for older people and that he could have one of our jump ropes instead. His response: “But I am old. I’m 6 and a half.”
He was the only kid to take home a jar opener from the fair.

-Staff members from UNMC’s Munroe-Meyer Institute put on a puppet show about kids with disabilities for hundreds of students from rural Nebraska on “Largest Classroom” day. I think Kelley Coutts may moonlight on Sesame Street. Her portrayal of “Mark,” a young man in a wheelchair who can do anything his friends can do, is not just touching, it’s really, really good. 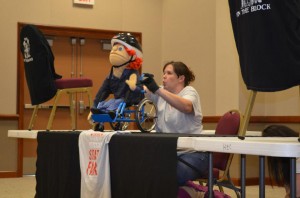 If you go, BYOO (Bring Your Own O’Connor).

One thought on “UNMC on the Road”