Luckey and Good: My Day with a Primary Care Doc

Earlier this year, U.S.News and World Report ranked UNMC No. 6 in primary care education. In an effort to explain the importance of “primary care” on the health care continuum, we felt it was important to “show” not “tell” what those two words mean. What is life like for a primary care provider? What are the benefits and drawbacks of practicing primary care in a rural area? I set to find out earlier this summer by spending the day shadowing family medicine doctor and UNMC alum, Gerald Luckey, M.D., in David City, Neb. His day started early and ended late. And in between, it defined primary care.

6:19 a.m.: Dr. Luckey is picking weeds in front of his two-story house with his stethoscope in hand. Earlier, over a slice of toast and coffee, Luckey dialed into the Healthland Network with his iPad to check the vital signs of hospitalized patients. “It helps me get a head start to the day,” he said. 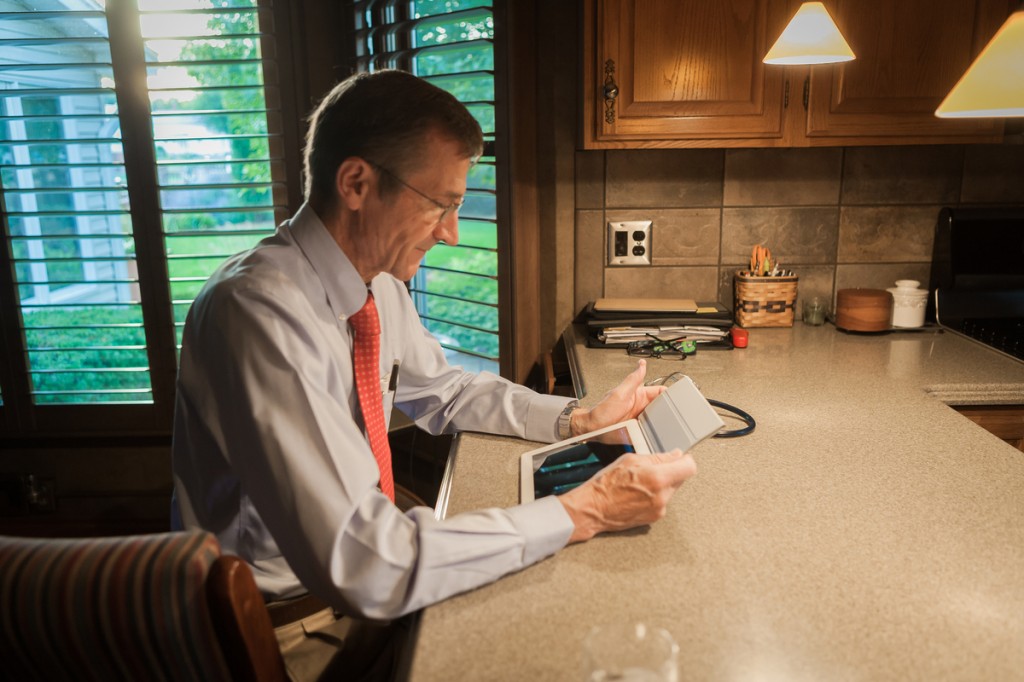 6:29 a.m.: Luckey pops open his garage and hops on his bike for a quick ride to work. Photographer Phil Nealey and I are running to keep up with the 67-year-old. Luckey pedals by before Nealey can even get the lens cap off. He settles for taking pictures out his driver’s side window with his left hand. 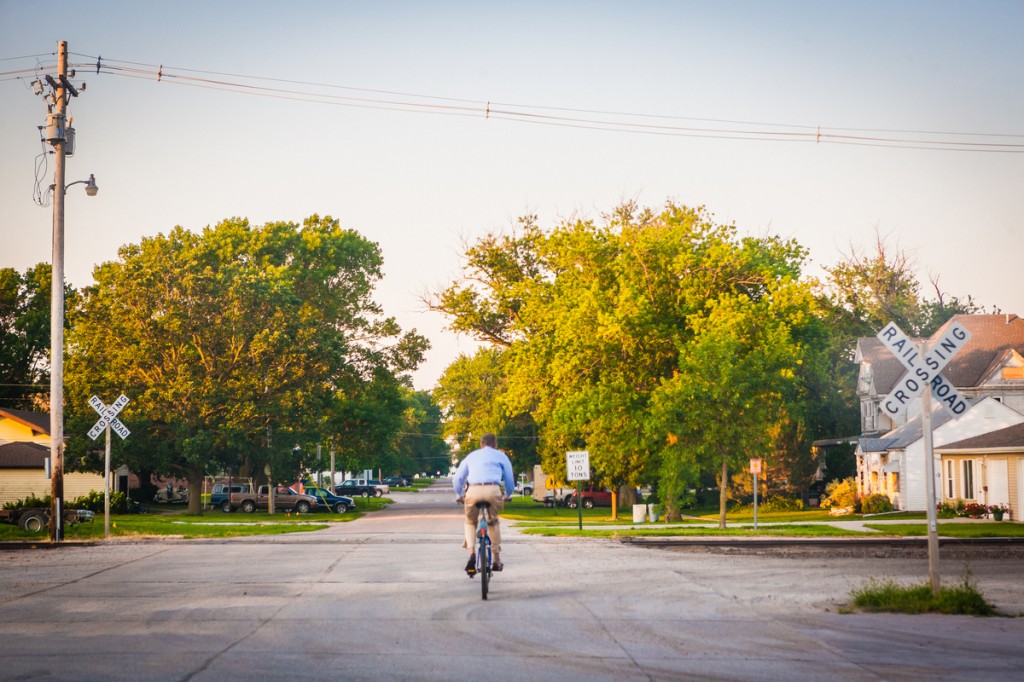 6:36 a.m.: A mile and a half later, Luckey arrives at the Butler County Health Care Center, where he has served the people of rural Nebraska for more than three decades. Inside, we find Luckey with a cup of coffee, having traded his loafers for tennis shoes, his slacks for scrubs and his tie for a white coat. 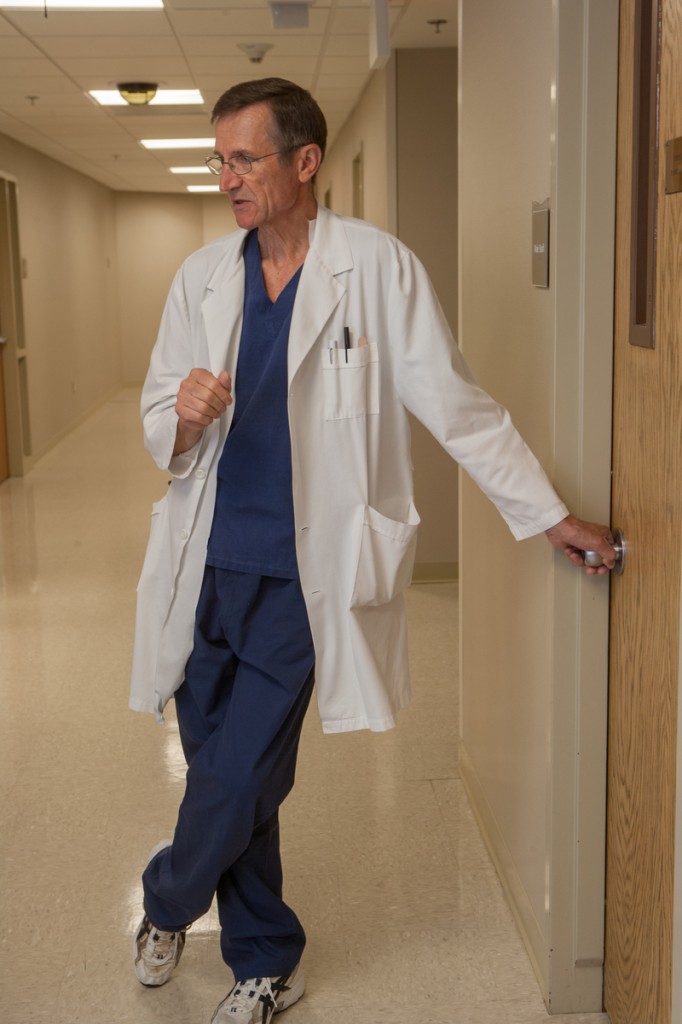 6:53 a.m.: Luckey heads into the procedure room. On the docket: two colonoscopies and an upper GI endoscopy. He hangs up his white coat as the nurses sedate the patient. Using a video-game like controller to view the woman’s intestines, he notes diverticulums in the colon – a weakness in the muscle wall. “She just needs to eat more old-fashioned oatmeal,” he says.

As the camera reaches the secum of the colon, Luckey gathers the team for a look. His fascination with the human body hasn’t waned after almost 40 years in medicine. 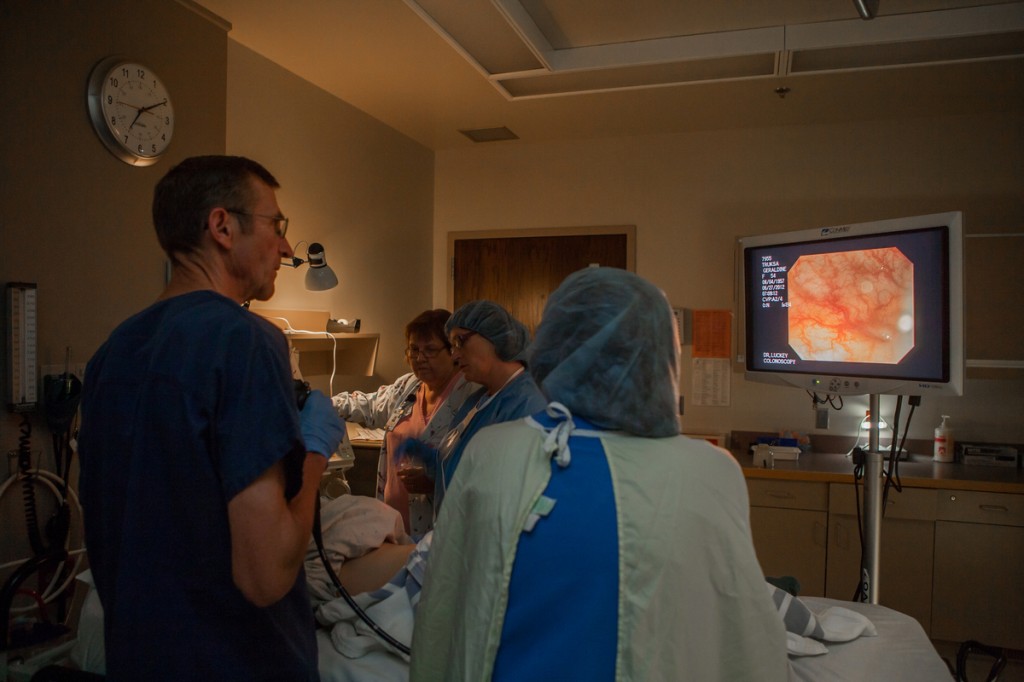 There’s no special story as to why he chose to be a doctor. “I looked up to the family physician and knew I had younger brothers who would run the farm.” And that was that.

7:28 a.m.: Luckey scrubs out, and I scurry after him as he heads to the doctors’ lounge to dictate into a landline phone. His voice is soft, and I catch about every fourth word. Colonoscopy.Period.Diverticulum.Period. You can tell he does approximately 175 colonoscopies a year. 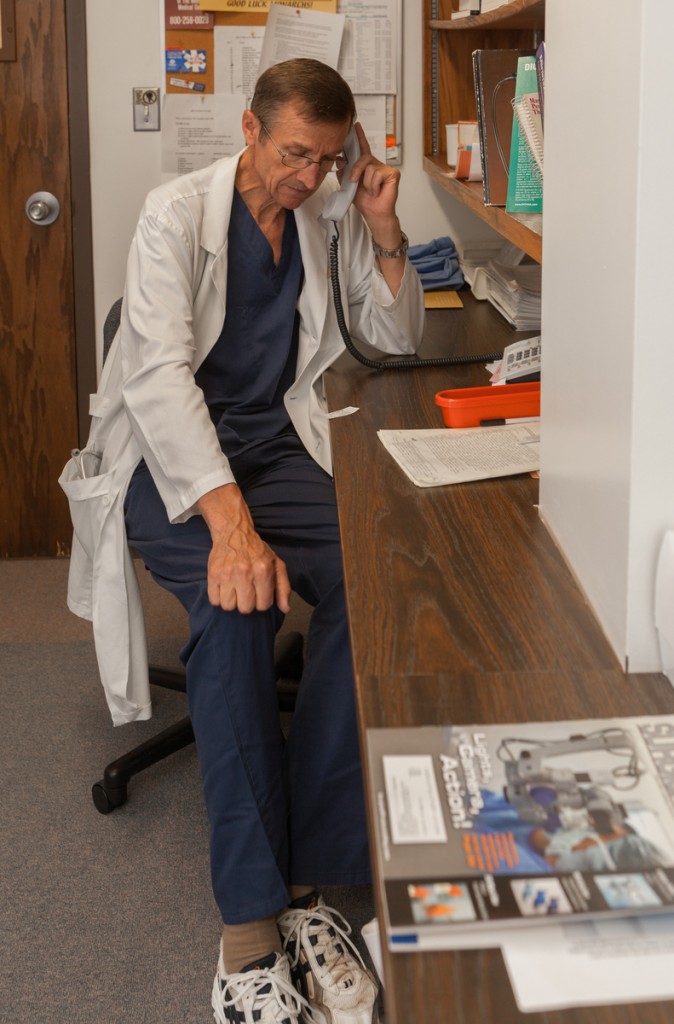 We take a brief tour of the staff lounge, where the lunch lady knows the husband of Luckey’s first patient. In a town of fewer than 3,000 people, it’s not surprising that Luckey’s next patient taught his nurse’s son to drive a stick shift in high school and pulled her car out of a ditch last winter. That patient is John Dehner, and today is his 81st birthday.

8:16 a.m.: The AM radio plays softly as Luckey performs an upper GI endoscopy on Dehner. A dose of “bubble buster” to clear away saliva reveals an abnormal, corkscrew-like swallow. With the help of his team, Luckey nips a piece of esophagus to test for possible Barrett’s esophagus. They’ll know the results by tomorrow. Luckey heads down the hall and informs Dehner’s wife of 50-plus years that everything went well. “Now, let’s get John some birthday cake,” he jokes. 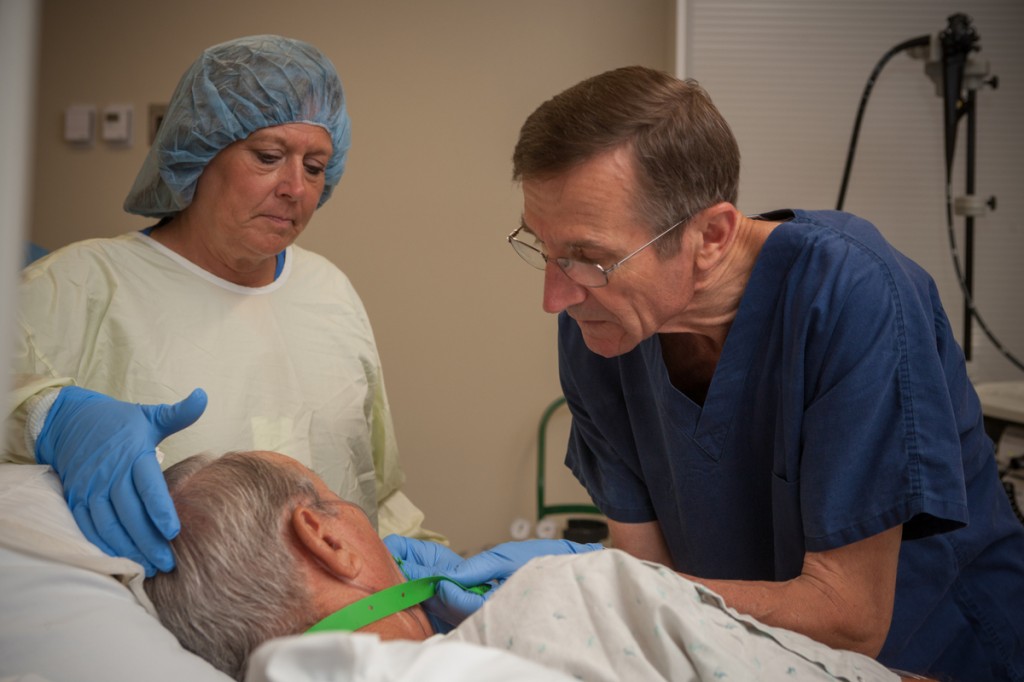 Luckey disappears, then returns five minutes later, telling me he had to check on a patient in the hospital. I just can’t keep up with this guy.

9:09 a.m.: Teresa Pokorny of Bellwood has a family history of colon cancer. That’s why she’s here for a colonoscopy before age 50. Luckey puts her at ease, asking how the crops are growing. As he’s finishing up, Luckey discovers and removes a polyp. They’ll test it for cancer, but he’s confident it’s benign. He tells Teresa she did an excellent job on the “prep” — code for colon cleansing. “Do I get a sticker for that?” she quips.

10:07 a.m.: Luckey stops for his fourth or fifth cup of coffee (he’s not sure) after changing back into his button-down-shirt and tie. He winds his way over to the clinic side of the building and confers with a nurse. A man called worrying about blood in his urine. Another was concerned that insurance won’t cover a brand-name prescription. A pregnant woman asks if she can have dental X-rays at eight weeks along?

“Luckey, the hospital line is for you,” someone yells from around the corner. 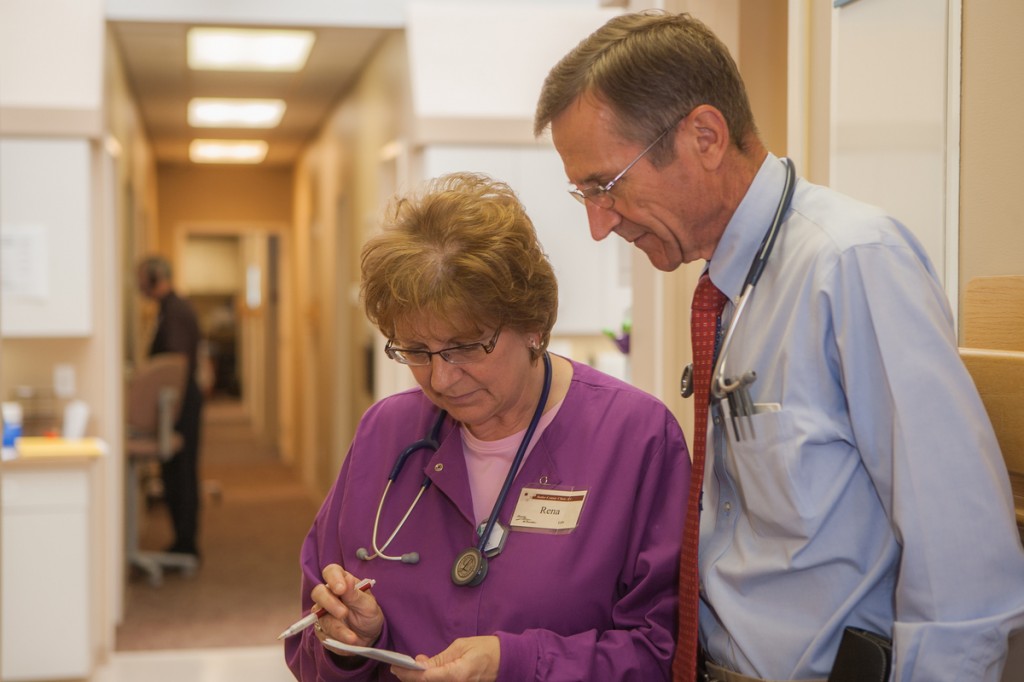 10:27 a.m.: Luckey opens the door to one of three exam rooms and is greeted by Albin and Gladys Shultz. Luckey doesn’t mind the two-for-one appointments. “You get more accurate information,” he said. 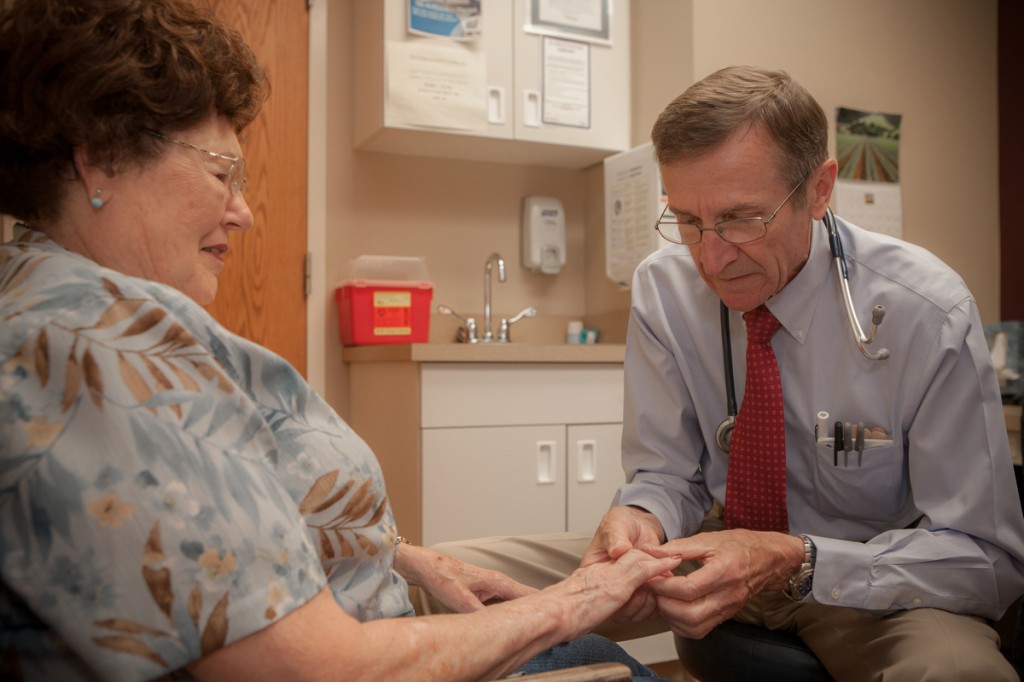 Gladys mentions that calluses on her feet have been bothering her. A good pedicure might have been in order, but instead Luckey trims her calluses on the spot.

Hanging on the wall is a plaque in the shape of the State of Nebraska. “2003 Nebraska Family Physician of the Year.” Luckey also received the 2012 J.G. Elliott Award from his alma mater, the University of Nebraska Medical Center, for being an “outstanding physician, leader, educator and innovator in rural medicine practice.” None of his colleagues was on hand to witness the honor. “He didn’t tell us until the Monday after,” says Dr. Mark Carlson. 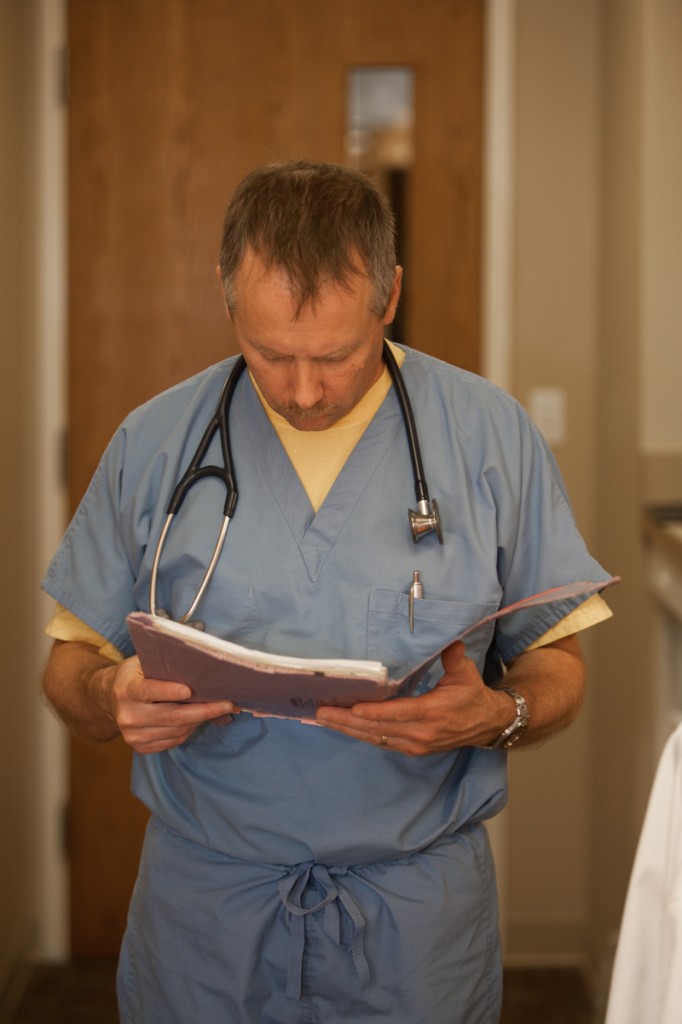 Luckey has served as a mentor to many UNMC medical students and health professionals. “The students are able to do more here,” he said.

Unlike many office-based family physicians, Luckey and his students do hospital rounds, perform surgeries every Wednesday, dabble in obstetrics and gynecology and rotate being on call for the emergency room every fifth day. Luckey does nursing home rounds on his day off. “It allows us to maintain our skill set,” he said. “But we could use more help in the area of mental health and psych.”

In return for sharing his knowledge with students, they help him with his iPhone and electronic health records. “We still have paper charts, but we try to order prescriptions via the computer,” he said. “Some days I feel like a data-entry person.” 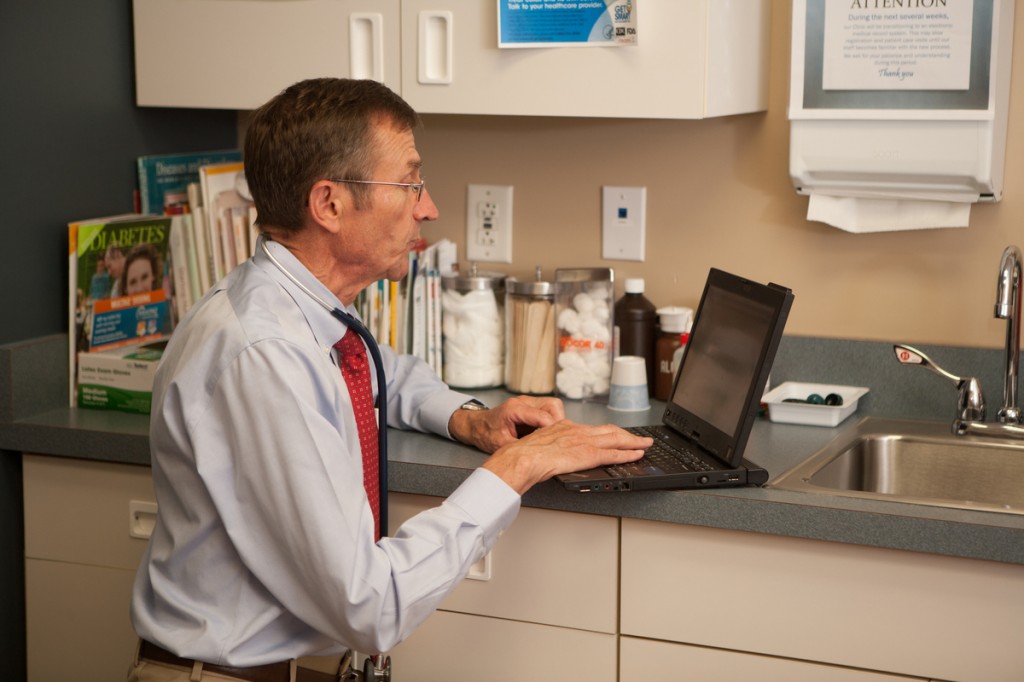 11:05 a.m.: A patient with a persistent cough and a crushed vertebra is back.

Luckey sympathizes as he knows she likes to garden. After reviewing X-rays, he demonstrates flexion exercises for the pain and prescribes an inhaler for the cough. 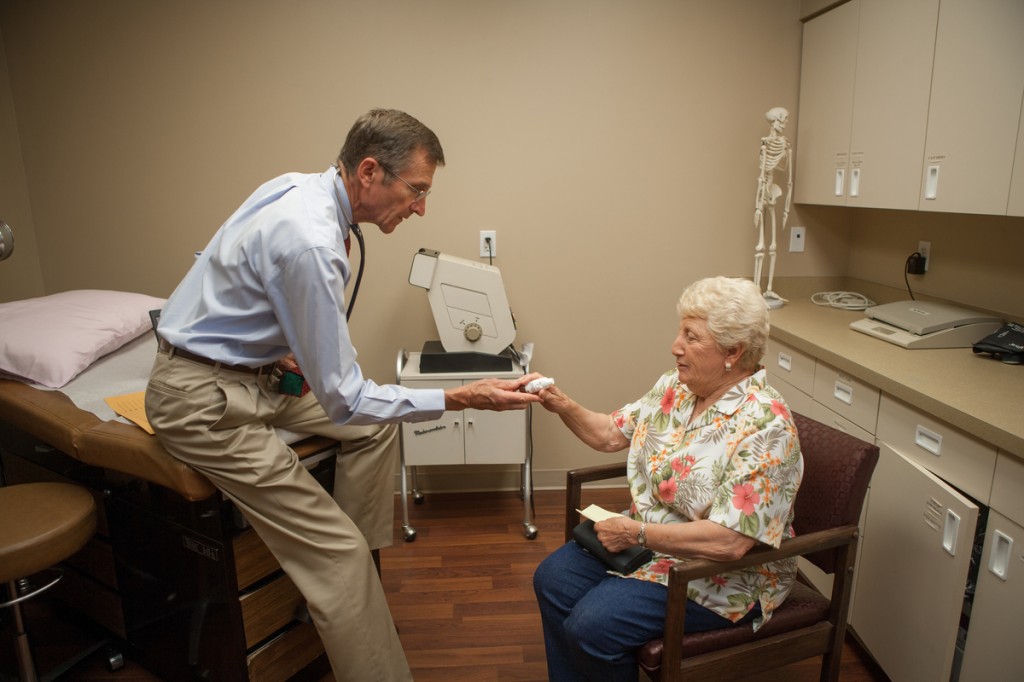 12:02 p.m.: Luckey helps himself to oven-fried chicken and cranberry salad as he joins a confidential credentialing meeting. I’m happy to have a few minutes to sit down. I rue the moment I decided not to wear tennis shoes. 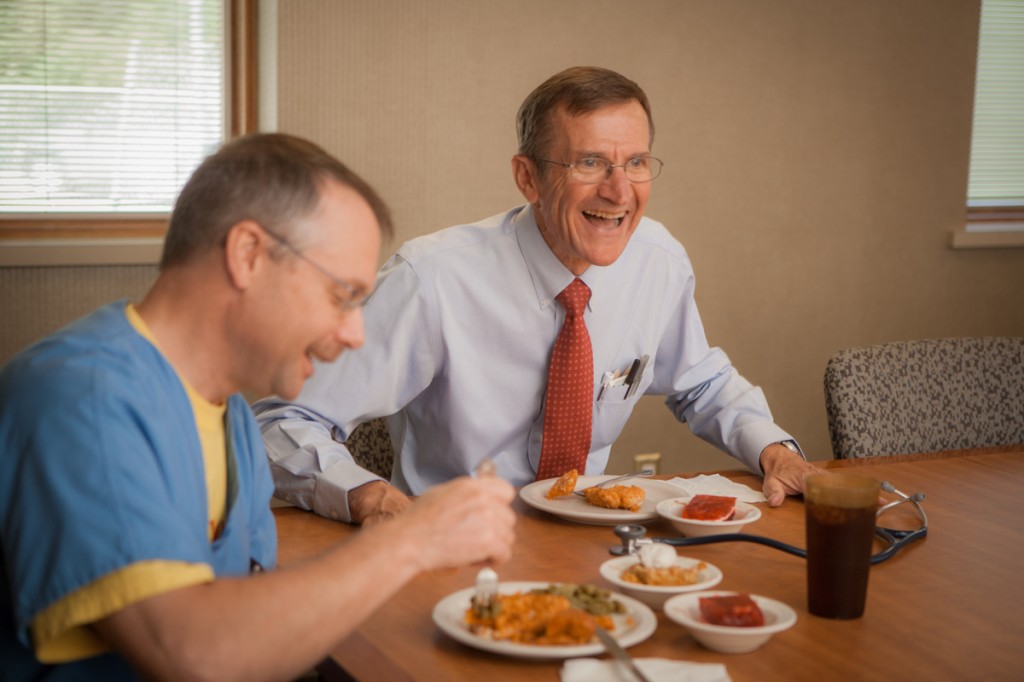 12:46 p.m.: Luckey is sipping a Diet Mountain Dew at his workstation outside the clinic exam rooms. He walks us by the mailroom, where we get a look at his overflowing inbox. He’s part of a physician’s group whose members exchange charts for review. He’s also affiliated with several physicians hoping to set up a rural Accountable Care Organization or Health Care Co-op. He spends weekend nights on these projects. 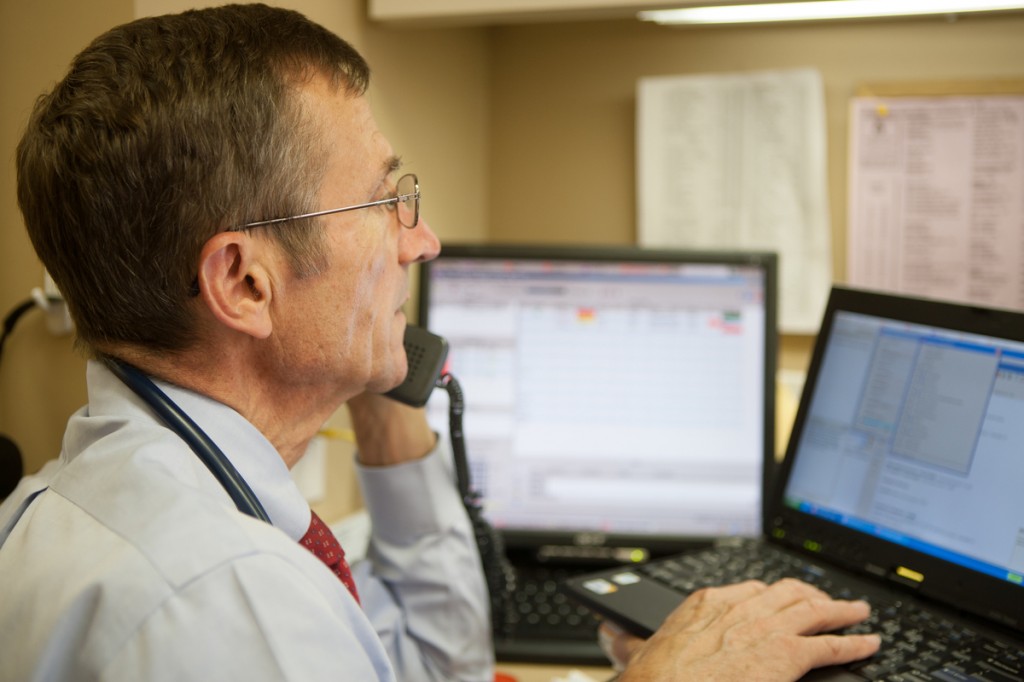 1:11 p.m.: A 94-year-old woman who had a rapid heart rhythm is in because medication is making her heart beat too slowly.

1:31 p.m.: An 82-year-old woman who recently had shoulder surgery is in for a follow-up. Her range is impressive. Her worst problem: not being able to do her hair.

2:37 p.m.: An 80-year-old woman with chronic back problems. Luckey sketches the reason for her pain onto a notepad and recommends a patch to alleviate it. 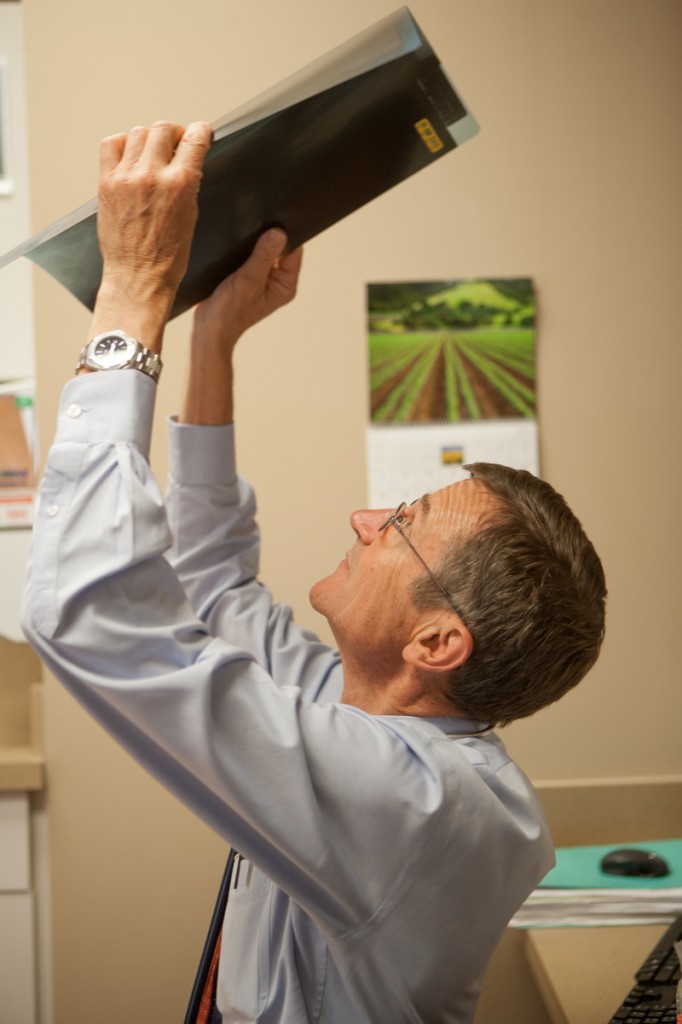 One woman brings in all 10 of her prescription bottles. This is why Luckey favors the medical home concept, where one physician coordinates all the care. The idea is to keep the patient’s costs down by serving as a one-stop shop. “If we send people away (for their health care), that’s bad for the local economy,” he said. “We want to keep them home, and patients appreciate having their health care delivered in their hometown.” 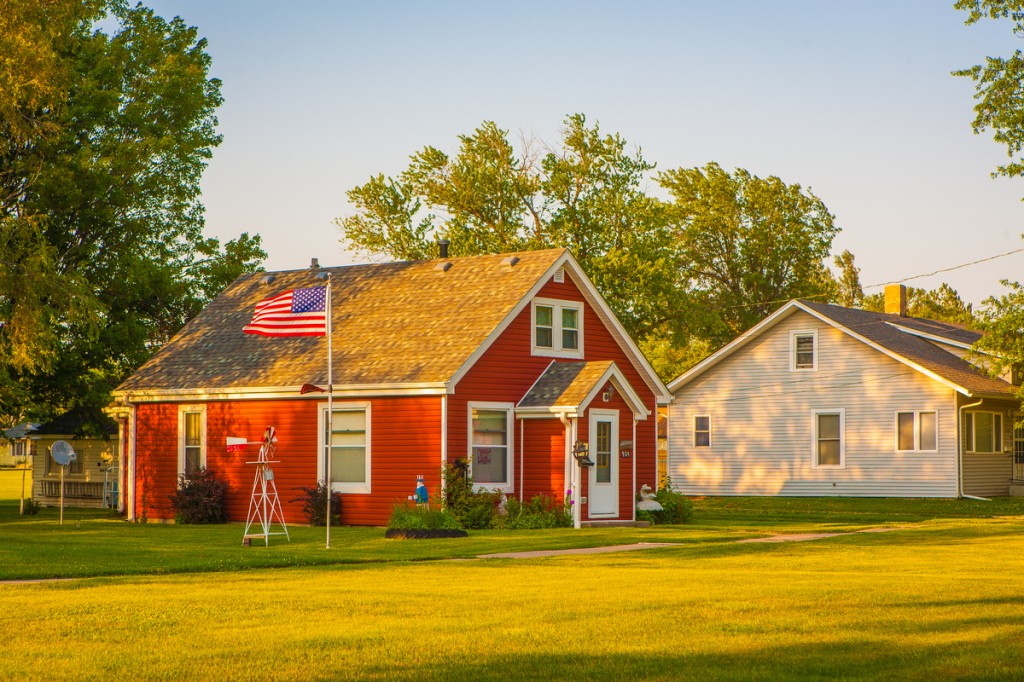 The town of David City is “lucky” to have Luckey, who was born on St. Patrick’s Day. A Shelby, Neb., mother once told him his last name was the reason she chose him to deliver her son. That son: Gold medal Olympic bobsledder Curt Tomasevicz. Maybe she was on to something.

3:10 p.m.: A line has formed, and Luckey is bombarded as he emerges from an exam room: “What would you call this type of ulcer?” Ischemic; “PT or OT?” (Physical therapy or occupational therapy?) PT; “Can you read this EKG?” Yes.

While Luckey is with another patient, Physician Assistant Leah Hays says, “If I could take someone to the fountain of youth, it wouldn’t be my mom or dad, it’d be Luckey. He’s the best family medicine doctor in the state.” 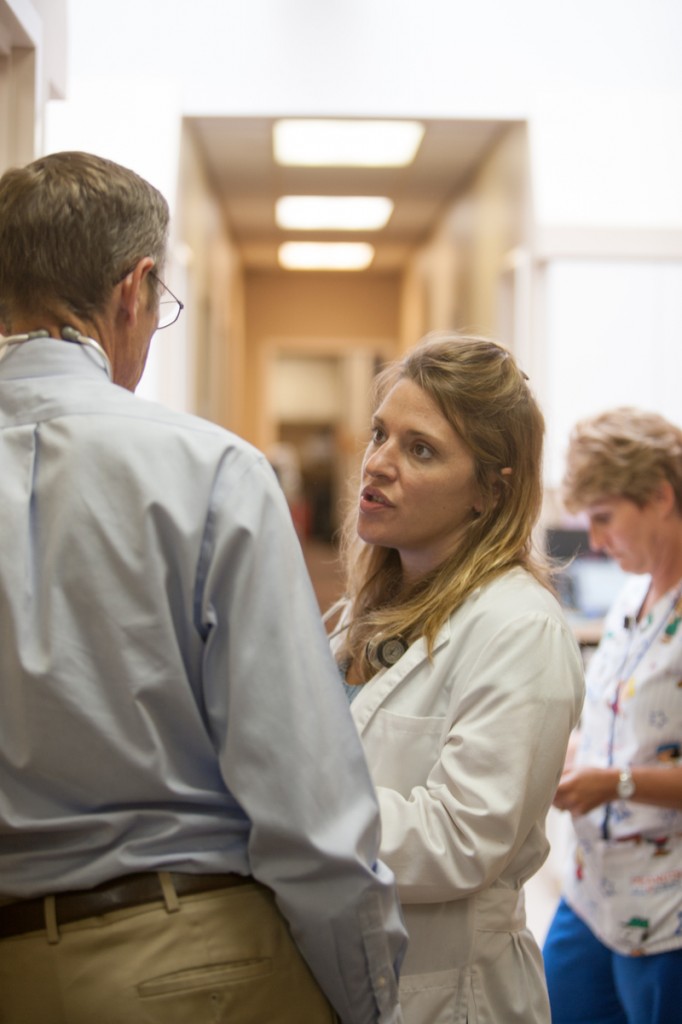 Luckey — a Columbus, Neb., native — relishes small-town life. “Ninety-five percent of the things I like to do are quick and handy,” he said. He fills up his gas tank once a month.

There’s no traffic, and there are no strangers.

He tells the story of the time when his knees were younger and he was nearly finished with a long run on a gravel road on a hot day. He had maybe 100 yards to go. Just then, a farmer tore off after him. “Doc, whaddya think of these blood pressure readings?” Did he stop? “Oh yeah, I stopped and talked to him.” 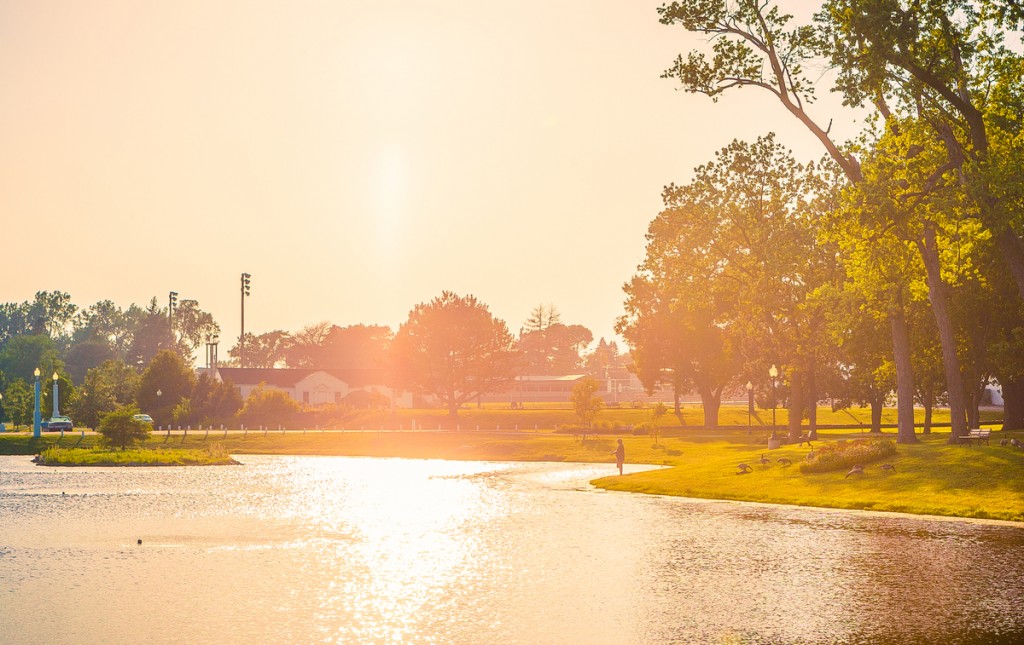 3:45 p.m.: A nursing home wants to bring in a patient. Luckey doesn’t hesitate to add him to his afternoon appointments.

4:07 p.m.: A patient with a marginally low thyroid level is feeling “pepless.” Luckey also checks her feet for psoriasis, places her shoes back on and tells her he always wanted to be a shoe salesman.

4:32 p.m.: Luckey drains fluid from a patient’s swollen knee. “We can do mine while we’re at it,” Luckey jokes.

For the clinic staff, 5 o’clock signals quitting time. Luckey still has hours of work ahead of him. He needs to check on three patients he admitted to the hospital, fill a dozen or so prescriptions and finish documentation on all the day’s patient visits.

Even by the time I’ve returned to Omaha and have recounted the exhausting day to my husband, Luckey is still at the clinic. About 8 p.m., he heads home for dinner with his wife, but he’s back at the clinic by 9:30 to sign off on more than 35 messages. Luckey autographs more paper than Taylor Martinez pens pigskin. 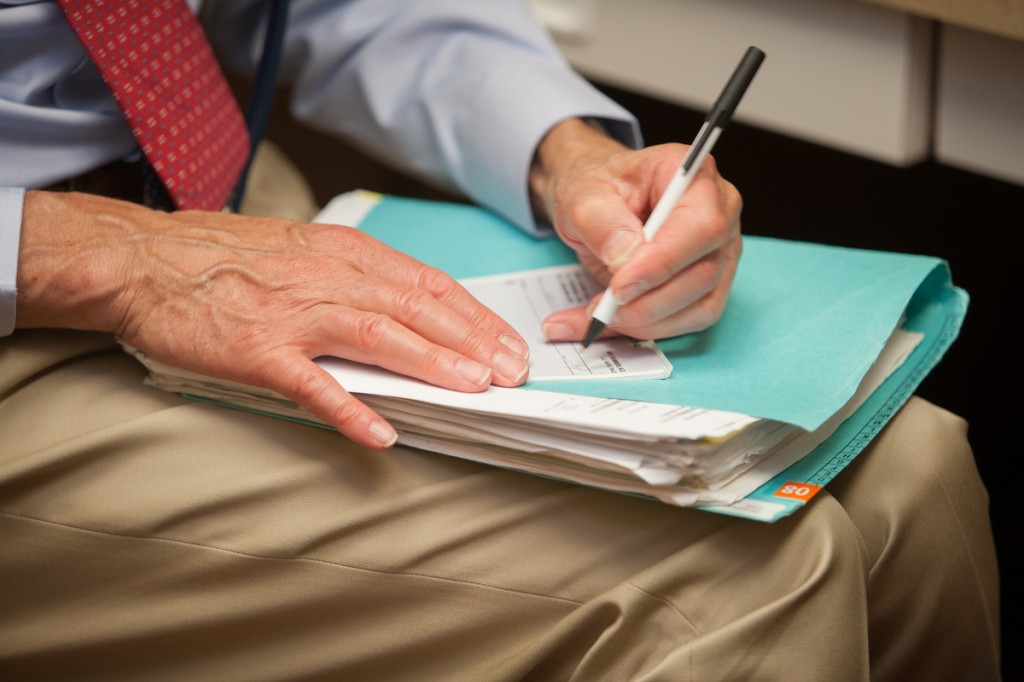 “It occurs to me that this schedule is not what many people desire,” he said. “It just happens to be what I enjoy.” 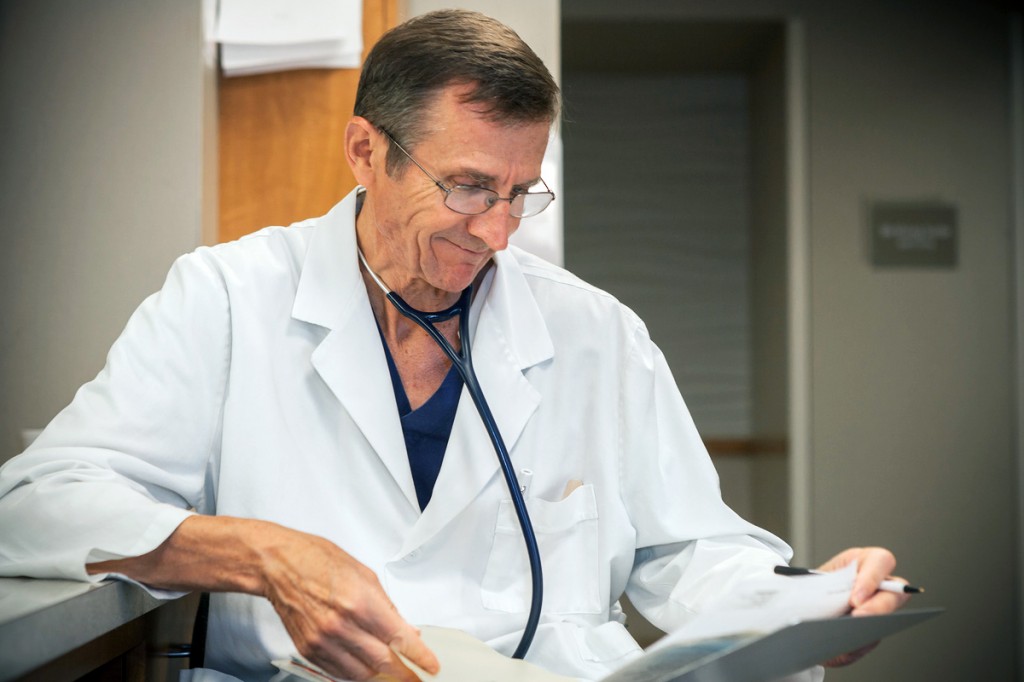 20 thoughts on “Luckey and Good: My Day with a Primary Care Doc”