Dr. Cornish: "Up your nose with a rubber hose" 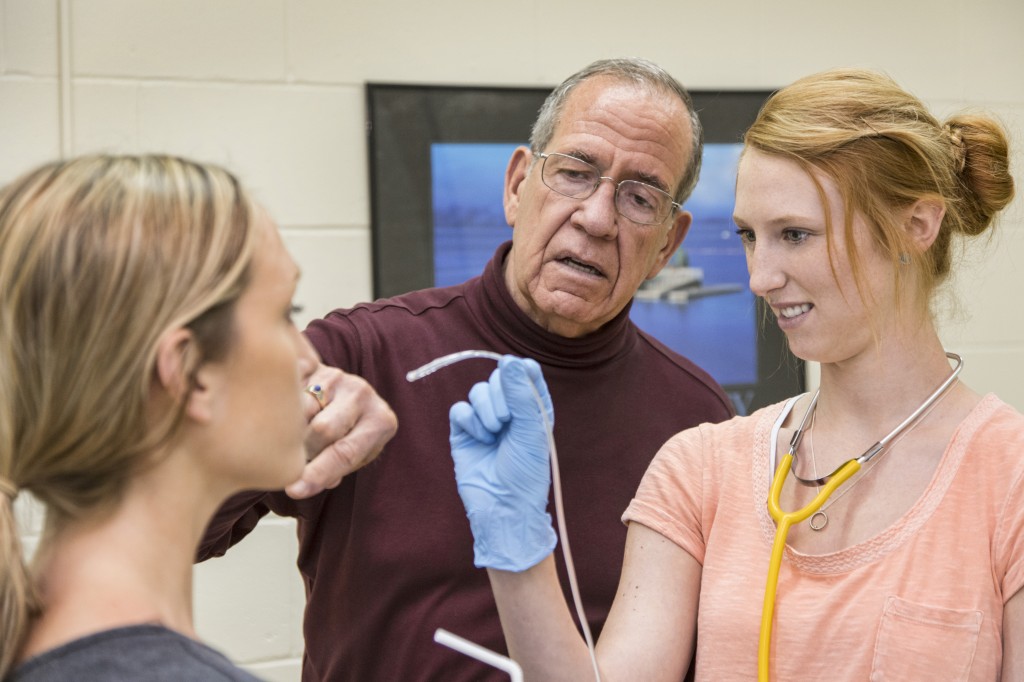 Little known fact: Back in the '70s, it was Dr. Cornish who first gave Vinnie Barbarino the famous catchphrase "up your nose with a rubber hose."

Kurtis Cornish, Ph.D., sat at the front of a classroom in Wittson Hall wearing the expression of a man who knows what’s coming.

Still, he insists it is no big deal to have a nasogastric (NG) tube snaked up his nose, down his throat and into his stomach. That – showing how little a deal it really is – was the whole point of this exercise.

“He swallows about 40 NG tubes in three days,” said Patti Carstens, program manager for the Clinical Skills Center in the UNMC College of Medicine.

Dr. Cornish, professor of cellular and integrative physiology, has won the Golden Apple, UNMC’s teaching award, so many times they stopped counting. And during June Term, this is what he does.

His session on NG is the highlight, the showstopper, the event everyone seems to talk about, over the three-day skills brush-up sessions for med students heading into their clinical years.

In June Term, students will do an NG intubation and have it done to them. But not before Dr. Cornish demonstrates first.

They used to demonstrate on a student, he said. But the student would gag, flinch, fight, and then, “The whole class was terrified.”

Won’t they still be terrified?

“Some of you who have a deviated septum may have an advantage,” he said, before he took the tube.

Afterward, a student said, “That did not look comfortable.” Then, to his partner: “You go first.”

Around the room, tubers and tube-ees took nervous breaths. In chests and stomachs, butterflies danced.

“When you push the tube down, don’t be shy,” Dr. Cornish had said. But easier said than done, at least the first time.

Ever-changing, manic facial expressions (this was made for YouTube) marked the tubes’ progress, or lack thereof.

One woman did “the vapors” flaps like a Southern belle.

But, eventually, they got it down. And then out.

“HOOOOOAAAAAAHHH!” one woman said, as her tube made its escape.

“I’m soooo sorry,” she said. But she needn’t have been. It was just a sound effect.

So now they’d done it. And they basked in the giddiness and confidence that comes with relief.

Except for one tuber. And one tube-ee. Time after time, they kept trying.

At last Dr. Cornish stepped in, and sat down. For the second time in 20 minutes, he was going to show how this was done.

One thought on “Dr. Cornish: "Up your nose with a rubber hose"”