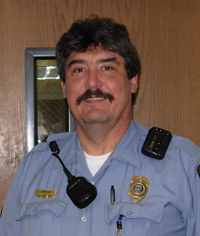 John Ingraham has been a UNMC security officer since 1978. Yes, there’s a lot of routine and repetition involved. But he’s also had his life threatened over parking tickets. He’s seen some pretty crazy things.

And he exercised with Richard Simmons (that guy has crazy energy). He snuck Robert Redford in the back door (OK, the man is handsome; but, come on, he’s not THAT handsome). And he visited sick kids with Mr. T (I pity the fool who doesn’t think Mr. T has a heart of gold).

We see them as friendly faces around campus. But UNMC security does more than make rounds and check locks.

“A lot of people that have gotten experience here have gone on to other police forces,” Ingraham said. “State patrol. Douglas County, Sarpy County. Omaha police. The sheriff. Pottawattamie County. One went into the FBI.”

But others are lifers here. How can you tell a guy is going to stick?

And, often, they see, experience and handle more than the rest of us will ever know.

“So far this morning,” Ingraham said one recent day at 10 a.m., “we had a car accident in Lot 1. We had a person down in the intersection of 40th and Emile Street that the rescue squad took to the emergency room.”

“We’ve had six or seven (calls) in since 8 o’clock this morning. One was a suicidal-homicidal. One was on an EPC, an emergency protective custody. We had a Code 99 come in, and several other less critical.

Join us next time

In order to share some of these adventures – from the funny to the harrowing – UNMC Today and A Day in the Life of UNMC are partnering with Ingraham to tell some of the best stories from his 34 years on the job.